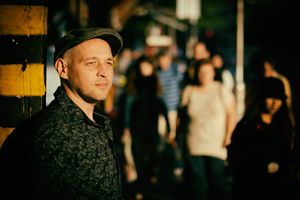 Born and raised in Budapest, Gee formed his first band in 1996 and began touring mostly in Hungary and Central-European countries before moving to the South of the United States in 2004. He spent time in Birmingham, AL and Memphis, TN as he tried to establish himself on the local scene. Finally he got his break with a steady gig on Beale Street in Memphis and his reputation started to grow.

Little G's second album "The Teaser" was released in 2012 and wowed critics worldwide. "The Teaser" was ranked Top 10 Best Blues Album of the Year by Mojo magazine, the popular music publication in the United Kingdom.

In January 2013, Gee took the first place at the International Blues Challenge as a solo acoustic artist. Six months later he released his first full length acoustic record "Moving" through Vizztone Label Group (USA). Mojo magazine ranked the album "Top 3 Best Blues Album of the Year" and it was nominated for Blues Blast Music Award "Acoustic Album of the Year".

The highest honor given to blues musicians and awarded by vote of Blues Foundation members is the USA Blues Music Award. Little G Weevil was nominated for the BMAs in 2014 as "Acoustic Artist of the Year". Later that year he joined the judging panel in the 5th series of X-Factor (Hungary), the mainstream television music talent show franchise.

Due to family reasons Little G Weevil returned to Budapest in December 2018. During the first year of the covid pandemic he wrote a based on real life novel titled "Játssz Tovább" (meaning Play On, the adventures of a Hungarian blues man around the world), which is now distributed nationwide in Hungary. Giving the reader more interactive experience, 22 QR codes included in the book with Little G's original songs matching particular scenes in the story. The album "Play On" was released at the same time as the book, featuring star guest singers from the United Kingdom and Hungary: Dionne Bennett, Ian Siegal, Fatima Mohamed, CéAnne, Vera Jonas, Sena Dagadu, Rita Foris, Jonathan Andelic and Mo' Gigs front man Csaba Gál "Boogie".

In February 2021, Little G recorded a 100% acoustic, 100% live solo set for Hunnia Records. The 17 songs set was released digitally in April as "Live Acoustic Session". The album was nominated for Blues Blast Music Award in the "Live Blues Recording of the Year" category and topped the Roots Music Report's Acoustic Blues Album Chart in November, 2021.